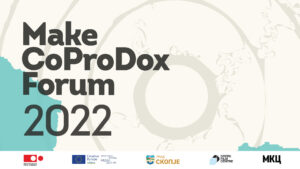 MakeCoProDox Forum is a forum whose main goal is to develop a strategic plan to increase documentary film co-production between the Balkan countries. The Forum welcomes representatives from 12 regional film agencies, documentary associations, documentary professionals, and 10 projects in different stages of production selected through an open call.

In anticipation of an economic crisis, the culture and film industry are often the most affected by budget cuts. Only by acting in solidarity and increasing regional co-productions can Balkan countries increase the number of funded projects despite the reduced funds.
The first documentary film co-production forum took place during the 10th edition of the Creative Documentary Film Festival MakeDox in 2019, and its 4th edition will be held this year. Our objective with this project is to establish a new alliance sector in the Balkan region for the first time, as the only way to amortize the consequences of the crisis. Within the online sessions we will present the problems that regional countries are facing, and try to find possible ways of overcoming them, while emphasizing their unspecific regulations dedicated to supporting the development and production of documentary films.

“It is hard not to be in love with MakeDox. The location, the films, and the people. After nine years as a Film Commissioners for documentaries in Denmark and Norway, it makes sense to share knowledge, and I am happy to learn more about the way Balkan is doing things. I am also moderating a network of key persons from the Balkan film agencies and centers and it is a privilege being together with a group who wants to exchange, innovate and work for the best conditions for filmmakers and films in the future.”

You can find the MakeCoProDox Forum catalogue on the following link.