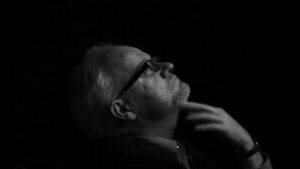 Aim of the workshop:

“It will be a pleasure for me to meet filmmakers who have film proposals that are still in the development phase. Maybe you have written down your idea, and maybe you have a treatment, maybe (actually, I think this is the most important thing) you have some visual materials to show. The crucial part is that you are open to feedback from colleagues and me.

Three days: Introduction and presentation; Individual sessions; Presentation for MakeDox participants. And hopefully, you will go home full of inspiration and what I always call “creative confusion and doubt.”

Worked with documentary films for over 20 years at the Danish Film Board as press officer, festival representative, and film consultant/commissioner. Co-founder of Balticum Film and TV Festival, Filmkontakt Nord, Documentary of the EU, and EDN (European Documentary Network).

Awards: In 2004, he received the Danish Roos Prize for contributing to the Danish and European documentary culture. Two years later, he received an award for promoting Portuguese documentaries in 2006. In 2014, he received the EDN Award “for an outstanding contribution to the development of the European documentary culture”. In 2016, he was awarded with the Cross of the Knight of the Order for Merits to Lithuania. 2019 a Big Stamp at the 15th edition of ZagrebDox. In 2021 he received the highest state decoration, Order of the Three Stars, Fourth Class, for the significant contribution to the development and promotion of Latvian documentary cinema outside Latvia. In 2022 he got an honorary award at DocsBarcelona’s 25th edition and has served as organizer and programmer since the start of the festival.

From 1996 until 2005, he was the first director of EDN (European Documentary Network). Since 2006 a freelance consultant and teacher in workshops like Ex Oriente, DocsBarcelona, Archidoc, Documentary Campus, Storydoc, Baltic Sea Forum, Black Sea DocStories, Caucadoc, CinéDOC Tbilisi, Docudays Kyiv, Dealing With the Past Sarajevo FF as well as a program consultant for the festivals Magnificent7 in Belgrade, DOCSBarcelona, Message2Man in St. Petersburg and DOKLeipzig. He teaches at the Zelig Documentary School in Bolzano, Italy, and writes reviews for www.filmkommentaren.dk

Selected Projects for the Development Workshop

THE GOOD DEATH
Country: Turkey
Director: Hasan Ete
Producer: Hasan Ete
Through the Wish Ambulance Foundation, The Good Death documentary project examines the last wishes of a terminal patient who has limited time and the process of making their wishes come true.

ISTHMUS
Country: Greece
Director: John Marinopoulos
Producer: John Marinopoulos, Mina Dreki
In an uninhabited island in Greece, a shepherd and an archaeologist try to coexist, but tension rises, as the excavation expands into the shepherd’s territory once again.

IRON CASTLE (DEMIR HISAR)
Country: Macedonia
Director: Mitko Panov
Producer: Viktor Pavlovski, Mitko Panov
The smallest commune in a small country – in Europe and at the end of the world.
Six parallel stories intertwining dozen of different characters of incumbents and intrudors. Each focused on his own problem.

THE LAND WE BREATHE
Country: Croatia, Germany
Director: Manuel Inacker
Producer: Oliver Sertić
As a hauntingly beautiful river delta in Croatia suffocates under the growing weight of wildfires, mass tourism and its war-torn past, four unique-yet-interconnected people forge bonds with their ecosystem as a means of survival, both for themselves and for the land itself.

MY LIVING PLACE IS HUGE
Country: Germany, Macedonia
Director: Jose Chavez Boggio
Producer: Jose Chavez Boggio, Anika Chorbeska
The documentary portrays the life of extraordinary people in Berlin who live outside the society conventions. Existential curiosity and/or psychological, family, and economical difficulties shape the need for a strong separation from the formal society. Being independent often leads to living in the streets.