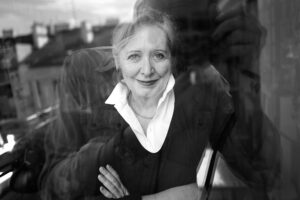 Since the beginning of her career as a filmmaker, Helena Třeštíková has been devoted to the method of so-called “time-lapse” shooting.In essence, it means to record the fate of selected protagonists over several years, sometimes even decades. It is actually a fusion of document and story because every person’s life has its peripeteia that is being recorded.

In her documentaries, she focuses on continuity, patiently building stories and waiting for events that will signify a life. Her latest trilogy of portraits (Marcela, René, Katka ), shot in the late 2000s, brought her international attention. Masterpieces of editing, the three films confirm the filmmaker’s deftness at transforming the humdrum existence of the downtrodden into unique, fascinating narratives.

Within the framework of the masterclass, Treshtikova will talk about the methods of developing ideas for a documentary film and will try to present different aspects of her atypical documentary method by showing excerpts from her most famous films.

The discussions will be led by Tue Steen Müller, documentary consultant, and critic.

One of the most important Czech documentary filmmakers, Helena Třeštíková has directed some forty films since graduating from Prague’s FAMU film school in 1974. She worked for a long time in Czech television, which funded the hit series “Marriage Stories” (1987), seven years of portraits of young married couples. The series’ six episodes combined sociology, demography, and cinéma-vérité, making the filmmaker very popular in her country. It was followed in 2006 by a second series, “Marriage Stories 20 Years Later,” which catches up with the couples later in their lives. Both series feature Trestikova’s signature working method, known as “time collection.” During her years in Czech television, Trestikova showed an interest in female characters, directing several portraits of women with tragic lives. The disgraced actress in Lída Baarová’s “Bittersweet Memories” (1995), the imprisoned opponents of “Communism in Sweet Century” (1998), the victim of Nazism and Stalinism in “Hitler, Stalin and Me” (2001) and the concentration camp survivor in “My Lucky Star” (2004) all recount their personal histories, marred by 20th-century totalitarian ideologies.

Her latest trilogy of portraits (“Marcela,” “René,” “Katka”), shot in the late 2000s, brought her international attention. “René” won the prestigious best documentary prize at the European Film Awards in 2008. “Katka” won two awards at the RIDM in 2010, including best editing. In these three portraits of society’s outcasts, shot over a period of ten to twenty years, the director focuses more than ever on continuity over time, patiently building stories and waiting for events that will signify a life. Masterpieces of editing, the three films confirm the filmmaker’s deftness at transforming the humdrum existence of the downtrodden into unique, fascinating narratives. The trilogy also highlights Trestikova’s complex relationship with her characters, especially in “René,” where her own life increasingly comes into play. She continued with her time-lapse method also in her later works, like “Private Universe,” covering a span of 37 years from one family’s life. Recently, Helena Trestikova’s works have been the subject of retrospectives at several major festivals, including the Buenos Aires International Festival of Independent Cinema (BAFICI), the Thessaloniki Documentary Festival, and RIDM Montreal.